A simple way to face joint boards wider than your jointer

I have seen various complicated jigs and methods for face jointing boards that are wider than the jointer. I find that a bit puzzling, because you really don't need a jig at all. Here's my method:

I start by passing the wood over the jointer. Only part of the board gets jointed as the board is wider than the jointer's cutter head.

After the first pass, part of the wood is cut. I didn't cut deep enough to fully straighten the sutface, It's better to take shallow passes with this method.

Next I flip the board over (turning it about a vertical axis) so that the part that didn't pass over the cutter head is now next to the fence, and make a second pass.

After that pass, I again rotate the piece 180 degrees about the vertical axis (back to the orientation of the first cut) so that the edge that wasn't just over the cutter head is now against the fence, and take another pass. I repeat the rotations and passes until the bottom is mostly planed.

Of course, it's not possible to get the bottom completely flat this way, although by adjusting the jointer to take less material off on the last pass, it will get it quite close to flat. But there's always going to be a step-edge on the face.

Intuitively, you might think this procedure would result in a deep sort of V groove in the middle of the board, but it doesn't. The reason it doesn't is that the board is supported partly by the rabbeting ledge (the part of the infeed table that protrudes to the left), which prevents the left side of the cutter head from digging too far into the wood.

Having a step-edge on the face of the board doesn't matter much for thickness planing. So next I pass the piece through the thickness planer, with the just-jointed face down.

I take a few passes until the top is flat. Next, I flip the piece over so that the jointed face (with that step edge) is facing up), and take one more pass through the planer to flatten that out.

And that's all there's to it. I now have a piece that is straight and flat on both sides.

I have since bulit a 12" jointer so I don't need to use this technique anymore. 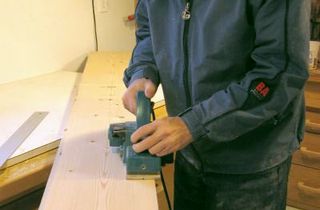 Another technique for flattening wide boards

Squaring lumber on the jointer

Cutting tapers on the jointer
More about using jointers