Making knapp joints on the pantorouter

I saw pictures of knapp joints (also known as cove and pin joints) before but two months ago, "Pask makes" made this video about making a knapp joint, and that inspired me to make one on the pantorouter.

I started by designing the templates in SketchUp, basically by drawing the joint, then scaling it up 2x because the pantorouter reduces by 2x.

I pasted it on some nice plywood and cut it out on the bandsaw.

I puzzled a bit over how to accurately position the pins of this template, but then I had the idea of using glue stick to glue them onto another copy of the template.

I then put wood glue on top and glued on the "backer" on top and weighed it down. After the wood glue dried I was able to peel off the paper template from the other side.

The complimenting template for this was more straightforward. I just cut it out on the bandsaw and drilled the holes.

Mounting the template on the metal pantorouter template holder.

The metal pantorouter has a tiltable table that can be positioned vertical for cutting into the side of a piece of wood, but that always makes it difficult to clamp. Also one time I set the depth of cut too deep and accidentally milled into the table!

I had the idea of just attaching a sacrificial vertical "table" to the edge of the pantorouter's table.

My vertical table has a side-fence to help me position the stock vertically.

This made it easier to clamp the workpiece on and made for better visibility.

Cutting out the holes. I made the pins 5/16" (7.9 mm) in diameter. I'm cutting these with a 1/4" router bit, moving the follower inside the hole in the template in circles as I plunge.

Then switching to the pins template.

That left an inside corner on each end of the joint that I couldn't get into with the router, so I squared that corner on the bandsaw.

It was a tight fit, I had to bang it together with a mallet.

The problem was that I designed the template to be used with a 1/2" follower, but I didn't actually have a 1/2" follower, so I used a 13mm follower instead. But using a larger follower means less material is cut away, making for a tighter joint.

With the test joint done, I switched to some nice hardwood to make an actual box. Here cutting the pins in a piece of cherry.

And test fitting it. I made a 1/2" follower out of wood to make for a slightly looser fit, but hardwood is much less compressible, so it was still a very tight fit. it took quite a bit of banging to take this dry fit apart again.

I still needed a bottom for this box, which is inset into a groove in the box sides.

I cut that groove by making a series of cuts on the table saw.

Then assembling it with glue. Note the mallet in my hand. I didn't do any more dry fitting because the joints are just too hard to get apart.

Then inserting the panel for the bottom. The panel is plywood, so I don't have to worry about leaving room for shrinkage and expansion. I glued it in place, which helps to make the box sturdier.

I don't think knapp joints are very strong joints, at least not compared to box joints. But they do look neat.

Banging in the last piece.

I deliberately cut the joints a bit too deep, figuring I'd sand them flush afterwards, but there was too much to just sand away, so I trimmed them mostly flush on the table saw first.

And then I sanded everything flat on the belt sander.

One of the joints of the assembled and varnished box.

The joints didn't all come out perfect, but good enough that you have to look very closely to see the imperfections.

Having seen Pask Makes's video about making a knapp joint, I figured, this is another joint the pantorouter could do more easily.

Pask's method is closer to how these joints were cut originally.

It at first seems strange that a machine for cutting dovetail joints had not been invented yet, but I think a big part of the problem was that the necessary technology and materials didn't exist yet.

Cutting a dovetail joint with a router means making a full-depth cut with the dovetail bit into the end grain. That's really hard on the router bit, even a carbide bit. High speed steel is worse, but back in the 1800s, there was no carbide or high speed steel.

Nor were there any "routers". Machinery was powered by steam engines, driven by flat belts, which cast in place Babbitt bearings. Speeds of 10,000 RPM were not practical. But if you were to try to cut with a dovetail bit at just a few thousand RPMs, it would jump and chatter like crazy. So modern approaches of machine cutting dovetail joints weren't practical at that time.

But a big "plug cutter" style cutter could be run slowly to cut the pins part of the joint. As for the holes part, holes could easily be drilled with a drilling machine, and the outline of the holes part could be cut with a haunching machine.

Apparently, the joint fell out of favour when "classic" stuff came more into fashion and people didn't want these modern machine cut joints. Also, by that time, machines for cutting dovetail joints had been invented, so knapp joints were no longer necessary.

But now the irony is, if you come across an old piece of turniture with knapp joints on it, you know its 130-150 years old. A real classic!

I don't think the knapp joint is a terribly strong joint. The pins that hold it all together aren't that much material. But still better than hand cut dovetail joints, because in hand cut joints, people tend to use as few pins and tails as possible because it's so much work to make them.

Update: I came across this video How to make a Cove and Pin Dovetail With Hand tools, Live | Knapp joint of making knapp joints by hand, but he uses separate dowels instead of cutting around the pins, so not quite a real knapp joint. 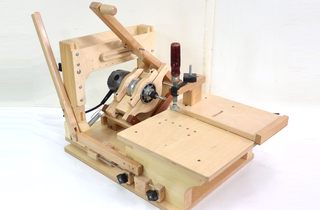 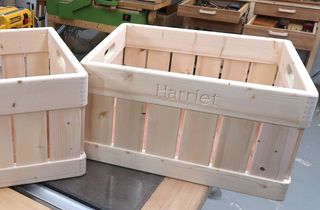 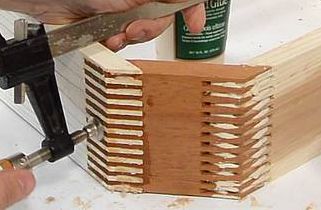 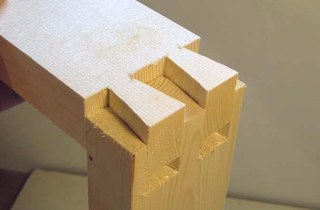 Dovetail joints on the bandsaw (2010) 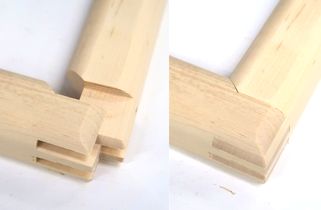 Half box joint, half miter joint (2021)
More on dovetail joints