Ridgid fixed base router with plunge base review

I had to put a big router back in my pantorouter when I cut the ramps for the marble toy. I took that router out of my tilting router lift, so I needed another router to replace that one, because I don't like moving routers back and forth.

At my local Home Depot store, they had a very limited selection of routers, and the Ridgid one was the only one with interchangeable bases and variable speed. So I bought that one.

There's a few things about the design of that router that I really like, plus one major gotcha, so I thought I'd share my thoughts on it.

The box comes with the motor, two bases, a collet wrench, some plastic guard / dust collector pieces, and a few other odds and ends. It also comes with a bag. I'll probably never put the router in the bag, but overall, I like the bag more than the usual molded plastic cases most tools come with. It's more space efficient, and I can use it to put other junk inside. The molded plastic cases are too bulky and I always throw them out eventually.

The router motor has a nice long cylindrical section, and, other than a small pin sticking out the side, no protrusions.

There is also a small indent in the side which is used to make sure the router is inserted the correct distance in the bases.

The tab on the plunge base for engaging with that indent doesn't work that well. It's too easy to push the router past this tab. But it's really only meant for initial alignment. A locking lever firmly clamps the router in the base. The nut on that lever needed to be loosened slightly to make it possible to close the locking lever at all.

The plunge base, like nearly every plunge base I have tried, has got a fair bit of play in the plunge columns. I imagine, if I was willing to spend 4x as much money on a Festool, I could get a plunge base without any play, but for that money, I could buy a whole shaper!

Included with the router was this funny T-shaped plastic wrench with a hexagonal hole in the end. This fits through the base of the router, so that the depth can be adjusted from above the table.

I think this has to be one of the coolest features of this router - you could just mount the fixed base under a table and use it as a router table, with much of the convenience of having a router lift.

I don't know now long that plastic wrench will last, But if it breaks, you could use a nut driver instead. And when I had a closer look at my Mastercraft router, if you have a long enough Allen wrench (not included), you can make above the table adjustments on that one too.

Ross Eckberg emailed some good comments about the height adjustment:

I, too, like the above-table height adjustment feature. I use this on my router table. One thing that is a bit of a drawback is that, in order to adjust the height, you have to unlock the base. In doing so, the router will actually drop down by about a millimeter. Then when you lock the base again, the router will come up about a millimeter. When setting the height, this has to be considered. Setting the height becomes a bit of an iterative process.

Something people should be aware of is that it is possible for the router to fall out of the base when using it in a table. As I mentioned, you have to unlock the base in order to adjust the height of the bit. When you unlock the base, the only thing keeping it in the base is the "springed tab" that goes in the indent of the housing. This tab is what lifts the router when you turn the height screw. Unfortunately, when raising the bit, the rotation of the screw can cause the tab to rotate with it, actually pulling it out of the indent. If this happens, the router will drop straight down onto the floor! Lubricating the height-adjustment screw seems to remedy the problem. I use WD-40. I have to lubricate it If I haven't used it in over a week (WD40 evaporates). I could use something like grease for a longer fix, but then it would get all dirty.

Despite these shortcomings, I do enjoy the router. The bag (instead of the molded case) is much more functional. The vacuum attachments are also very nice. The real seller for me was the lifetime service agreement that Ridgid has on all its power tools. I also have a Ridgid table saw. Personally, I think it's the best saw you can get under $600, but is comparable to other saws at $700-$900.

The router comes up just high enough to make above-the-table bit changes possible. Although, I suppose it would be as convenient to just pull the router motor out of the mount to make bit changes.

The router also came with this 1/2" steel shaft, and a plastic cone. I figured it was for centering, and the manual (which has absolutely no illustrations, by the way) confirmed that.

Once you loosen the three screws on the base, it can slide around by a few millimeters. You can then use the centering tool to center it and tighten down the screws. The centering tool is another cool thing about this router.

The router also comes with a little adapter for hooking up a vacuum cleaner. This screws on with two screws (provided). Another plastic cover on the other side closes off most of the base, which catches most of the dust for routing operations with that base. However, the screw head for attaching the vacuum adapter gets in the way of the T-handle for above-table depth adjustments. If you leave the screw out and attach it with sticky tape instead, the depth adjustment is still accessible.

I tried this dust collection, and it worked quite well. Though the one on my Mastercraft router worked just as well.

Enough about the bases - how well does the motor work?

For my first test, I just held it in my hand and adjusted the speed up and down. Speed control was very crisp, and it reached the new speed very quickly. So this router has a true closed-loop speed regulation - much better than the Mastercraft routers I have, and better than any external speed control could do.

I also felt less vibration from this one than from the Mastercraft router motors. So another win there.

But here is where I discovered something that caused me to consider returning this router. These routers are all 3.5" in diameter, so they can fit into common router lift. Or so I thought.

It's hard to spot the difference by eye. Left, the Ridgid, 92 mm, right, the Mastercraft, at 89 mm diameter.

But overall, I quite liked this router, and the hose clamps on my tilting router lift are adjustable, so I figured I'd just see how it fits anyway.

The radius on the wooden cradles doesn't quite match, but it works well enough. The router ends up pushing more against the ends of the cradle than the middle.

With the slightly larger body, the collet is just a bit off where the old one was. But it's workable.

Next, checking alignment by mounting a 1/2" polished steel rod in the collet.

I always spin the router a few turns to make sure the rod is in straight, and with this one, I could see much less wobble at the end of the rod than I'm accustomed to from my other routers. Another win for this one.

It ended up not-quite vertical in my router table...

...but a few shims between the router and one of the cradles fixed that. It is a wooden router lift after all, so I'm pretty sure that misalignment is not the router's fault.

Next, trying it with the biggest router bit that I have.

I never liked using this router bit because I'd get a lot of vibrations with my Mastercraft routers.

But with this router, I didn't have a problem. Another win!

Worked well taking a full depth cut in birch in one pass too!

One final dislike about this router - it comes with a collet adapter for use with 1/4" bits. My other routers all come with separate collets for 1/4" and 1/2". I very much prefer separate collets.

When I bought this router, I mounted it in my tilting router lift, where it has been for 18 months straight. But somehow, the housing has developed qutie a lot of corrosion. My other routers, even really cheap ones, do not suffer from this problem.

A reader, Arne Arneson, pointed out that this looks like the sort of corrosion he usually sees on magnesium. So it's likely that this router's housing is made out of magnesium instead of aluminium.

This The corrosion doesn't affect the function in any way, but it sure is ugly.

In conclusion:
The nonstandard body size of this router can be a major gotcha. But overall, I quite like the design and performance of this router. So as long as you are not planning on mounting this router in a standard sized router lift, this is a pretty good router to use. I'd buy it again if I hadn't already.

The Mastercraft router I was comparing it to is the Canadian Tire store brand. I'm pretty sure that same router is also available under different brands. For example, this one looks just like the Mastercraft in many ways.

Buying fixed base, routers outside of North America can be difficult and expensive. People often aske me where to get one, but every hardware store sells thee here, so I'm the wrong person to ask. But from the YouTube comments, some available options available outside North America are the Bosch 1617EVSPK. Also the AEG MF1400KE, which is nearly identical to the Ridgid router, and in the U.K. the Draper Expert 45368 which is nearly identical to my MasterCraft router.

A router table that's its own dust collector 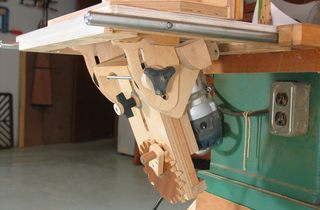