So projects that require a tractor, or even life in the country just didn't make sense anymore (and small kids don't help matters), so we decided to move and I sold the tractor.

But what to do with the partly built tractor shed? I gave away all the material to Matt Carrier, who lives not far from where we were, and also plays around with YouTube a bit. He took it all away to erect it on his property. Here Matt and his father in law are taking one of the assembled frames out of the shop...

... then cutting it in one place so they could load the pieces onto Matt's small trailer. They are cutting it somewhere other than where I cut it because thee are just too many nails where I joined the pieces.

It took three trips to haul away everything.

Here Matt is sorting through all the pieces of the frames to figure out which piece goes with which before putting the frames back together.

Three of the frames hadn't been joined at the top yet, so they didn't need cutting in half, here Matt is adding the spline to the top joint.

Here cutting some of the gusset plates out of plywood using a jigsaw, while his father in law is assembling frames.

The shed is going into a wooded part of his property.

The plan was to put gravel down inside the shed, but in the mean time, it's just cement blocks on top of smaller piles of gravel to help with the levelling.

The bottom plate for the shed consists of two layers of 2x6 lumber screwed together. Two layers for strength, but also because the shed is longer than any commonly available length of 2x6 lumber.

Carrying one of the frames to where the shed goes, among the trees.

Bracing the frames with temporary diagonal members to make sure they are vertical.

After the first three frames, Matt was working alone to put up the rest of them.

Like me, he discovered that manipulating these alone is awkward and difficult. Here the frame got out of hand on him and tipped over.

Like I did, Matt used a rope to help pull the frames vertically into position.

Placing the last frame. It's fun to watch the balancing act in the video.

Then screwing on the strapping. The strapping for the roof is pieces of 2x6 cut down the middle.

At this stage, I came for a visit to check it out, the only time I did. I was too busy preparing for our move to make another visit, and the shed wasn't quite done until after we moved to Frederiction, 1000 km from the Ottawa area.

He is, of course, putting the screws on top of the ribs of the steel, not on the flat part as recommended by manufacturers these days (more on that).

Cutting one of the panels for the top of the end wall at an angle with an angle grinder.

And here is the shed, mostly done. But this is as far as Matt will take it this year, so for this article, we'll call it done!

The ridge cap is still missing, but Matt quite likes getting a bit of light coming in through the top, so he's considering using some transparent material for the ridge cap instead of sheet metal. 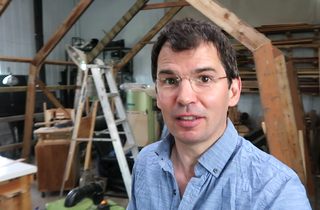 What happened to the tractor shed, and moving -- again