More suck from a shop-vac: Effect of hoses on dust collectors

When I compared a shopvac to the blower in my router table I was surprised how much lower the airflow from the shopvac was. I thought my shopvac would move more air, maybe it was the hose that was slowing it down too much. So I wanted to do some tests.

I cut a 12 cm diameter hole in a cardboard box so I could measure the wind speed into the box as I sucked air out the other end. First test with the standard shopvac hose, just 2 m long including the straight part at the end.

My anemometer averaged 2.2 meters per second. Across a 12 cm circle, each meter per second conveniently worked out to 24 CFM (cubic feet per minute), so 2.2 m/s was 52 CFM.

Next I tested the 3.9 meter long blue pool hose that I normally use. Even though that hose is much longer, I got 2.9 m/s, or 69 CFM. The hose has a slightly larger inner diameter, and that more than makes up for the fact that it's almost twice as long.

Then I tried a 2.5" dust collector hose. The hose connector fitting fits neatly into the inlet, but not far enough to hold it in place, so I made an "adapter" sleeve out of some soup can sheet metal.

With the 10' (nominal length, actual length a bit shorter) 2.5" (63 mm) dust collector hose, I got 3.4 m/s or 81 CFM. A considerable improvement over the standard hose. I also tried it with three 10' lengths of 2.5" hoses together, and I still got 64 CFM. At four times the length of my shopvac hose, I still got more airflow through them!

Some people like to use long wind-up hose reels with a shopvac. I don't have one, but I figured it would be interesting to test with a long central vac type hose. The hose we have is 8.8 meters long. With that hose, I got just 35 CFM.

While I'm at it, I also tested my cheap 1 hp dust collector for comparison.

I tested it with all the same hoses and also with a 4" dust collector hose that it's meant to be used with. Here's all my hoses, top to bottom:

That's because the dust collector's maximum (static) suction is only equivalent to about 18 cm of water height, as measured with some dyed water in a U-shaped piece of hose.

The shopvac would have sucked the water straight out of my U-shaped piece of hose...

... so I sucked from a small container to see how high a water column it sucks. In retrospect, changing the setup may have been a bad idea because I will get lots of YouTube comments from people who won't understand that what matters is not the shape of the hose, but the difference in water surface heights, which is what I'm measureing.

The shopvac was able to pull water up about 107 cm. Which is consistent with what most shop-vacs and vacuum cleaners can pull. With over 6.5x the static suction, the shop-vac can do much better than a dust collector sucking through the constriction of a narrow hose.

Another thing to consider is that the dust collector, while running, draws about 500 watts, vs 900 watts for the shopvac. Yes, the big dust collector consumes much less power than the shop-vac, and it's also much quieter.

Next I tested my homemade dust collector, shown at left in the image at left.

I tested it with different hoses, and with and without the cyclone. At right, with the hose hooked straight up to the filter box, bypassing the cyclone.

But what surprised me is just how much of a difference the hoses made. I guess the air flowing through the hoses makes for much more air resistance than the filter or blower in a dust collector. 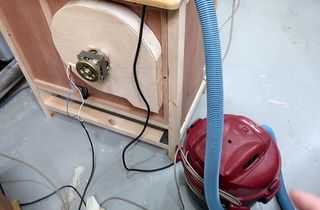 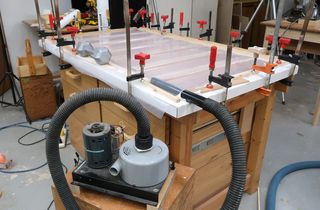 Vacuum clamping on the cheap, using a shopvac (2021) 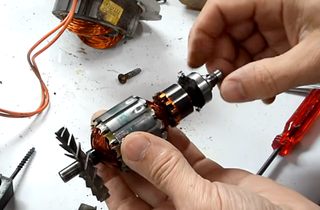 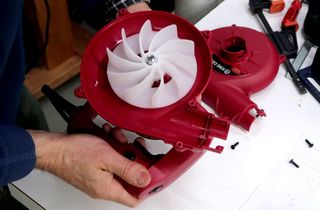