Of all the projects on my website, the ridiculous pen shaking contraption was the last one I'd expect to copy.

But just yesterday received an email from Michael Mills:

I wanted to show you a pen shaker my 13 year old son Roger Mills made from your web site. He had a project last spring in school where they had to come up with a contraption that a single movement would operate three simple machines. (ie: gears, wheel and axle, pulley, levers etc.) He got his inspiration from your web site and made it himself. I went to see his presentation to his class and it was amazing to hear the gasps in the classroom when the pen actually worked after he shook it. He received the highest grade of his class for this project.

Thanks for the pictures. Nice to see somebody else have fun with it!

I didn't actually have that much luck with mine. It couldn't revive the really dead ball point pens, and it was much too powerful for felt pens and fountain pens.

Mostly I built it to try out pinwheel/cycloid gearing gears from my gear generator and to see if I could get a three-pin lantern gear to work. I was also hoping to create a viral video. The video did well, but not the millions of hits I was hoping for.

how to make gears 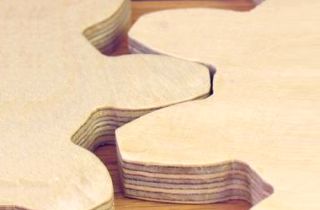 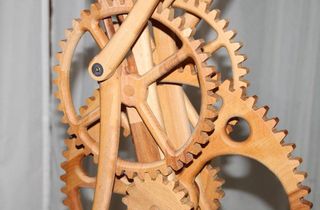