Planer "snipe" is when a planer cuts a little bit deeper at the beginning or end of a long board. The effect is usually quite subtle, but if you run your fingers along the board, you can usually feel a slight step. Shining a light on the board at a low angle also reveals it.

For small thickness planers, snipe is primarily caused by movement of the cutter head assembly. I constructed a simple wooden model to illustrate what happens.

The same thing happens at the start of the board when the board starts to engage the outfeed roller.

On my old Delta thickness planer, this snipe is on the order of 0.008" (0.2 mm). Fortunately, the rollers are very close to the cutter head, so only the first and last 5 cm of the board are affected.

This type of snipe can be avoided by feeding boards behind each other so that they touch and the roller never rolls off the boards (see here), although it can be hectic keeping the planer fed while picking up the pieces coming out of it at the same time.

Some of the better small thickness planers have a head locking mechanism. This locks the planer head to the columns that it rises up and down against. Other planers have four screw-columns to move the head up and down. Both approaches greatly reduce head movement and corresponding snipe.

My old delta planer doesn't have a head lock and it only has two screw columns, but it occurred to me that if I were to insert spacers between the planer head and the table and press the head down against those spacers, that might have the same effect.

But placing individual blocks would be awkward. So I made some "spacer bars" to stick into the planer. These have a thin part in the middle so that the rollers and planer head won't touch my spacer.

The spacer bars are only good for one thickness, but I figure if I had to repeatedly plane boards of the same thickness, this could actually be a useful feature.

With the spacer bars clamped in, I measured about 0.002" of snipe on one end, and no detectable snipe on the other end.

Another cause of snipe can be if long boards are fed into the planer unsupported. this will cause the board to tilt up a little and get close to the cutter head at the beginning and end of the board.

The rubber infeed and outfeed rollers are spring loaded and only press down so hard, so they won't prevent the board from tilting up a little bit.

Most small thickness planers nowadays come with fold-down infeed and outfeed tables, which largely prevent this type of snipe from happening. My old Delta planer came with two sheet metal tables that could be hooked to the planer, but they were kind of ugly and need to be placed on a large level surface. So I never actually used them. This cheap MasterCraft planer (store brand from Canadian Tire) comes with fold down infeed and outfeed tables.

For large cast iron planers, typically, the head is fixed in place and the table moves up and down. This means the head won't move, but sometimes the table will move or flex because of the varying amounts of downward pressure applied by the feed rollers.

Dewalt DW735 planer vs a cheap one 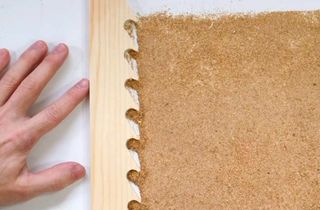