I previously covered how DC motors work, but AC induction motors are actually much more useful for homemade machines such as bandsaws. Induction motors are more difficult to understand. It was the wicked and insane genius Nikola Tesla who invented them. There is an extensive Wikipedia article on induction motors, so I'll try to keep this page simple.

Here I just pulled the rotor out of a small shaded pole induction motor (the type that would be used to power the fan inside the freezer part of a fridge). There are no electrical connections to the rotor. The rotor is also not a magnet, though it is attracted by a magnet.

A similar effect can be demonstrated by spinning an aluminium disk, and subjecting part of it to a magnetic field through the disk. As the spinning disk is held between the magnets attached to the metal bracket in this photo, it slows right down. Like in an induction motor rotor, the changing magnetic field induces a current flow in the aluminium, which in turn counteracts the change. The magnetic field through the disk trails behind the rotation, pulling it back, and stopping the rotation in short order (in fact, within a quarter turn of the disk). I recommend watching the video at the top of this article, it makes this much more clear.

The fact that the rotor doesn't like changes in magnetic field makes an induction motor work as an electric brake when DC is applied to its windings.

Here I have a 10-pound weight attached to a pulley on the motor. Applying a few amperes to the windings of this half horsepower furnace motor is enough to cause the weight to drop very slowly. However, no matter how much current is applied, the weight will still drop slowly, because the rotor only resists a change in magnetic field, so the breaking effect only happens when the rotor turns.

So far, we have established that induction motors are good at not turning. But if the magnetic field moves, the rotor wants to turn with it. Going back to the example with the metal disk, if I move the magnets quickly past the disk, the disk starts spinning to follow the magnets.

If we spun the stator around the rotor, that would get the rotor spinning as well. But that would be useless as a motor.

In a three-phase AC induction motor, we create a spinning magnetic field by applying electrical current to different windings at different times.

In a real three-phase motor, we actually apply sine waves to all three windings simultaneously. The sine waves are all 60 degrees (or one sixth of a cycle) out of phase from each other so that North smoothly transitions from 1 to 2, 2 to 3, etc.

I should add that in an actual three-phase transmission, the phases are 120° (one third of a cycle period) out of phase from each other, not 60°. But we can get 60° by taking the third phase, which is 240° degrees out of phase from the first and swapping the wires, which reverses it, or changes it's phase by 180°. 240 - 180 = 60. The phases are 120° degrees out of phase with each other so that the sum of the currents through all three phases always adds up to zero. That way, no current needs to flow through neutral (ground) conductor.

The operation of three-phase induction motors is easier to understand, but most houses only have single-phase AC. However, in North American 120 volt systems, single-phase power is often referred to as two-phase power, because there are two opposite phases of 120 volts. But these are 180 degrees out of phase. This makes for 240 volts between them, but doesn't get us any closer to a rotating field.

With single-phase, we can only make a field that goes back and forth. However, if we subject an induction motor rotor to a back and forth field, and it is already spinning, it will follow the back and forth, much like you can keep a flywheel and crank spinning by just pushing and pulling on a crank. But the alternating field won't be enough to get the motor spinning from a standing start.

This effect even works if just DC pulses are sent into the motor. Provided that the motor rotates easily, each pulse will cause the rotor to turn by a few degrees.

When AC is applied, the motor runs continuously.

But the shaded poles don't provide very much starting torque. In fact, the torque produced by a stalled shaded pole motor is considerably less than when it's running near full speed. But it's enough to get the motor running.

But shaded poles are short circuit windings, so they consume a lot of power. This makes shaded pole motors very inefficient.

In larger single-phase motors, 1/4 horsepower and up, starting is usually accomplished by an auxiliary winding. The auxiliary winding is either one with fewer turns and more resistance, or in series with a capacitor. Either method makes for a magnetic field slightly out of phase with the main field, thus adding a rotational component to the field, which is enough to get the motor started.

But the starter winding is usually inefficient, so most single-phase motors have a centrifugal switch which disconnects the starter winding once the motor is up to speed. This switch closing (reconnecting) again is what causes the "click" you hear from a lot of motors as they wind down, a second or two after having been turned off.

There are numerous ways that the starter winding on single-phase motors can work. These include:


I could write a lot more on starting methods for single-phase motors, but it's quite an involved topic, so I won't go into details here. However the Wikipedia article on induction motors has a lot more detail.

Two pole and four pole
Most induction motors are either two-pole or four pole. In a two-pole motor, the stator has one north and one south pole at any time, and the rotor needs to turn one full rotation (or close to that) for each cycle. For 60 Hz systems, a two pole induction rotor will run anywhere from 3500 to 3600 RPM (or about 58-60 turns per second). For 50 Hz systems, a two-pole motor will run 2900 to 3000 RPM.

In a four-pole motor, the stator at any time has two north and two south poles, with north and south always 90 degrees apart (thus, two north and two south poles are always opposite each other). The rotor becomes magnetized to this pattern. Only half a rotation is needed per cycle, and a four pole motor will run at 1725 to 1800 RPM for 60 Hz systems, and 1425 to 1500 RPM for 50 Hz systems.

Motors with more than four poles are much less common and only used for special applications. A typical "box fan" motor will have six poles, and a ceiling fan motor will have eight or more poles.

Varying speeds
A main disadvantage of induction motors is that they are not practical for variable speed operation. With the field spinning at a fixed speed (determined by the AC current supply), the motor only runs efficiently when it's running close to that speed. For small household fans, lower speed operation is achieved by allowing a large amount of "slip", that is, the rotor may rotate as slow as half the speed of the field, but this makes for a very inefficient motor, and the speed of rotation is highly dependent on the load, so this approach is not suitable for driving machinery. 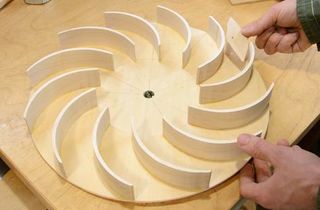 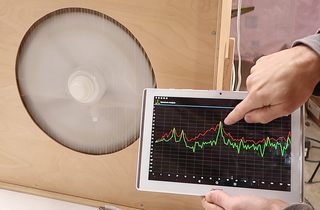 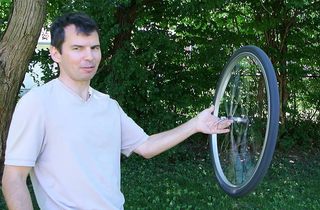 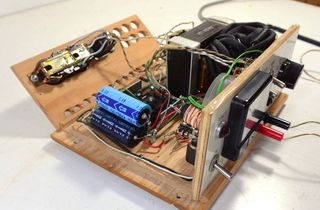 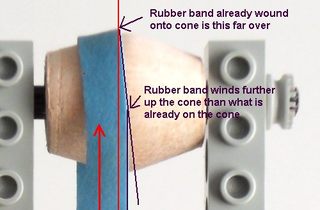 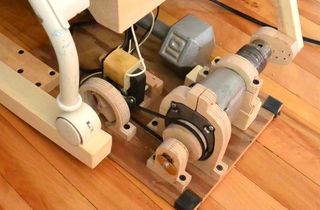 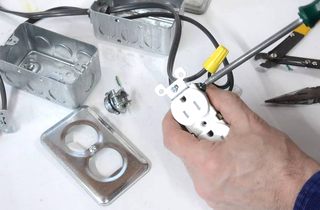 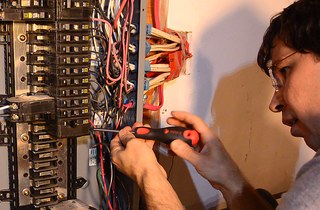 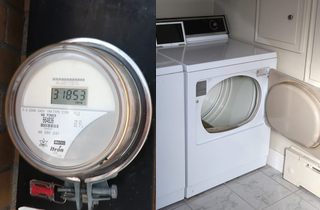