Until recently, this was my dust extractor. I switched it to barrels from bags because the shavings can be pressed down in the barrels, and the barrels can be stacked.

But the shavings are hard to burn in a wood stove, and I didn't want to throw them out either. So I looked for a briquette press. Industrial machines are available starting at about 10,000 Euros. But there are various homemade briquette presses on the net, for example here: http://www.brikomat.com

By now, the machine runs automatically, with few problems. It could still use improvements, and the rate of production is very dependent on the type of shavings used. The machine works fastest with short hardwood shavings. It slows down quite a bit when running with long thin shavings from softwood. The higher the lignin content (see Wikipedia) the firmer the briquettes become.

The deeper the plunger pushes into the pipe, the shorter the remaining pipe that briquettes must travel through, and the lower the friction. If one plunges too far, the briquettes will not be compressed enough and will fall apart. But if the strokes are kept too short, the friction of the briquettes in the pipe can get too high, and the machine shuts down from excess pressure. I then have to manually clear the stuck briquettes by drilling them out of the pipe.

The stroke length needs to adapt to the type of wood used.

The graph at left shows how the controller operates. After 3.5 seconds of stroke (stage 1), the hydraulic pressure needs to be a minimum of 5 bar. At stage 2 and 3, the pressure must be at least 6 and 10 bar, respectively. If the required pressure is not reached, the cylinder returns for another stroke to press more material. If the pressure peaks out and falls by more than 3.5 bar before reaching stage 4, it also starts a new stroke. Once stage 4 is reached, the cylinder only returns once the pressure drops below 50 bar or when the limit switch is contacted.

The above time and pressure parameters can be adjusted, and I don't always operate with these values.

Solenoid magnet (green) for operating the hydraulics, and electronic pressure sensor below (black). The sensor can read up to 160 bar.

Pressing rod, with a protrusion at the end. The protrusion helps multiple strokes form a single briquette that won't fall apart.

Initially, I used a pipe with an inner diameter of 35 mm, but the hydraulic cylinder had insufficient force for this. I added a smaller pipe inside the original pipe, with an inside diameter of 28 mm. With 7 tonnes of force, this should give me a pressure of 1136 kg/cm2. With the larger pipe, it was 727 kg/cm2. More pressure would be even better.

I cut the pipe open and bent the resulting 'flaps' outward. The container is bolted to the flaps.

This shows where the splitting wedge used to be. In its place, the pressing pipe and attached shavings container.

Augers move the shavings to the opening in the pressing pipe.

The orange gears engage the augers like a worm gears. The gears help prevent the shavings from bridging over the auger to prevent shavings jams.

The shavings container, full of shavings.

I used a windshield wiper motor from an Opel Ascona to power the auger ...

... combined with chains and sprockets from a bicycle.

A magnetic sensor senses auger rotation. If no pulses are detected for ten seconds of auger operation, the augers are assumed to be jammed and the machine shuts down.

Here you can see the auger, removed from the machine. The auger attaches to the hubs using two M8 bolts.

This shows how the auger was made.

This is the output side of the machine. The wheel engages the briquettes through a slot in the pipe.

A magnetic sensor detects the screws in the side of the wheel. Two turns of the wheel are almost exactly one meter of briquette. The quantity of briquette and hours of operation are recorded so I can calculate how many meters of briquette per hour are produced.

Another reason for monitoring briquette production: If no rotation is detected for more than three minutes, the machine shuts down. Either the shavings container is empty, or the shavings have jammed or bridged over the augers.

The briquettes are fed up a ramp to a barrel.

The end of the ramp has a wedge to break off the briquettes if they get too long. Otherwise, some will overshoot the barrel.

A friend built the electronics for me, but I wrote the software myself. A switch on the front panel allows switching between continuous operation or timed operation (for example, run for one hour).

I already had most of the components lying around the house. I only had to buy the pressure sensor and transformers new. The enclosure, motor controllers and magnetic sensors were bought used. So far, this press has cost me between 600 and 800 Euros.

The machine could be optimized further, of course. One could pre-compress the shavings, which would speed up production. But that would be too complicated for the time being. I'm thinking of improving the feed mechanism. My most recent change was to run the augers in the opposite direction.

Changing the auger direction did in fact increase the output, as the shavings are now pushed more towards the opening in the pipe. I'm also thinking of an alternative to augers, but that will have to wait until other projects are finished.

I will write a bit more about my workshop later, but first, I need to do some cleaning up.

This shows how I use the briquettes in the wood stove. You can see through the door that it's presently summer, so this is only posing.

I added a kilowatt meter to the press, so I could work out its efficiency.

For the barrel shown, I used a mix of sawdust that produces the best output. I used sawdust from the table saw from cutting firewood, and planer shavings from maple.

The barrel contains 51.4 Kg or briquettes, and the machine used 13.5 Kwh of electricity to produce them. With electricity costing about 0.25 Euro/Kwh, my power cost is 3.35 Euro

Wood briquettes cost 2.25 Euro per 10 Kg, but my electricity cost is just 0.65 Euro per 10 Kg. But I'm not counting the cost of the machine or the shavings.

The machine draws, on average, less than 1 Kw, so this took more than 13 hours to produce. I did not watch the time because the machine runs automatically and unattended. 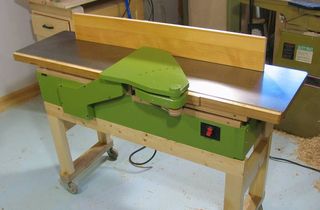 Buring sawdust
in a wood stove