Building a round dining table

I built this table back in 1996 together with my dad. It was the only time my dad and I ever built a piece of furniture together.
We are both pretty solitary woodworkers :)

My dad had built a round kitchen table for the house, but it was a bit too massive for my liking, and didn't leave much room for the knees. So we struck a compromise and built another table together, this one based on my own design.

As this was way before digital cameras, I didn't take any photos of the original construction. But I really like this design, and wanted to write an article about how to build one. So for the non-obvious parts, I re-built parts of it to illustrate how one goes about building such a table.

The tricky parts to this table is making the curved legs, and joining them together, so that's the parts I focus on. The original legs were made from 6 cm thick pine. As this isn't readily available, I laminated pieces of spruce. Making the legs out of multiple pieces actually allows orienting the grain a little better, for more strength.

To make the legs, start by making a template for the legs shape. The leg itself is 65 cm high, and 8.5 cm wide along its curved part except where the legs join the cross pieces, where it is a bit wider.

Two pieces of 2x6 lumber should be enough to draw the shape onto as seen at left. Glue these together, end grain to end grain, with a simple flat butt joint. This sort of joint wouldn't be nearly adequate if it was the final joint, but this is only the starting point. Note the notches I cut out to allow attaching the clamp. This is part of the wood that gets cut away anyway, so it doesn't matter much.

Next cut out the approximate shape, leaving about half a centimeter around the template outline. Then plane the legs flat on a jointer. Chances are, the joint produced on clamping them isn't completely flat, so planing it on a jointer fixes this. If you only have a 6" jointer like I do, it's necessary to rotate the piece as it goes over the cutter to get all of it. Unfortunately, this step also erases most of the pencil marks from the template.

Glue the pieces of board to both sides of the leg piece. I used a few extra clamps to press the board pieces against each other edge to edge, to ensure there was no gap between them.

Next trim the excess of the boards glued on both sides. This isn't strictly necessary, but it makes it much easier to put the template back on the leg and not risk putting it where there isn't wood underneath it all the way through.

Outline the shape of the legs again using the template.

Plane the back part flat. This surface is a reference for where the leg ends up, so it's important for that surface to be flat. If you find the outline and the planed surface not quite parallel, lift one end or the other of the leg a little as you plane it to get it parallel.

Finally we are ready to do the final outline cut of the table leg. This time we have to be really careful, because beyond this cut, it's just sanding to get it smooth.

Next plane the leg to thickness. The 2x6 plus two boards should be over 70 mm thick, so plane it down from both sides to be about 60 mm thick. Again, it's necessary to turn the work piece as its slid across the cutter head to make sure the whole leg is planed.

With the table saw set at 45 degrees, cut away a 2cm x 2cm 45 degree triangle. If the leg is 6 cm thick, the un-cut part on the back should be 2 cm wide after the cuts. But cut away only 19 mm first, so that you can check and possibly adjust the angle before cutting again.

Check that the two 45 degree angles together form a 90 degree angle. If this is not completely square at this point, you will really curse yourself when you try to put the whole thing together. When I built the original table, I wasn't careful enough about this, and it took a lot of force on final assembly to get it all together!

Next drill the holes. 5/8" is a good size to use. I use a simple little horizontal boring jig to do these reasonably accurately. Another alternative would be to build a 45 degree table for a drill press and clamp the leg to it, but that would be more work than building this horizontal boring jig. The tilting table on a drill press is unfortunately not usable for this, as the table leg would end up hitting the vertical column of the drill press.

The holes drilled. The holes are offset by 2 cm from each other along the leg, so that the dowels can intersect with each other. For the original table that I built with my dad, I used mortise ant tenon joints for this, but that was not ideal either, as the tenons have to intersect. I ended up cutting away notches from the tenons so that they formed a sort of box joint inside the table leg. But really, dowels are better for this application.

Make two legs as shown, and two that are mirror images of the one shown. If you make the legs all identical, you would have to make the cross pieces that join here asymmetrical, which can lead to confusion later.

Finally, sand the edges to smooth out the curve. This could have been done much earlier, of course, but then any nicks that you put into the legs while working them would still be on the final result. Best to just leave the sanding until late in the process to avoid this.

After sanding, use a 1/2" radius round router bit to round the edges. Do the routing after the sanding, so that the guide roller won't end up following any unevenness from the band saw cuts.

As you glue these together, check that the angle comes out square. If it's a little bit off square use some clamps to check that is square. Note the square resting on the piece for checking. I had to use an extra piece of wood as a spacer on checking, because the square could not be placed all the way into the corner.

Here's what it looks like joined. To join all four pieces together, its best to join two legs and three connecting pieces to form a sort of square 'C'. Then join two legs with one connecting piece, and joining that together to form a sort of 'I'. That way, if the distance of the two ends of the 'C' doesn't exactly match the distance of the holes of the 'I' part, you can use a clamp or a spreader clamp to bend it to force it to fit.

Here's the assembled frame, with the cross piece for mounting to the table top. If you make the table top out of solid wood, this is necessary, as the table top itself will expand and contract slightly with changes in humidity. The continuous part of the cross should be perpendicular to the grain of the table top, so that it can help to hold the table top flat. The other two pieces don't have to be very securely attached to the straight through piece. I ended up using a relatively shallow mortise and tenon joint, but really, two 5/8" dowels should do the trick too. The table top, along its grain, will be much stronger than the cross piece anyway.

Making the table top is no different for other tables. For how to make a table top, you might want to read my article on building wood tiled table top, even if you don't intend to do the crazy tiling like I did, it might give you some useful hints.

Here's a profile view of the table. The legs are 65 cm high, the cross piece adds 33 mm, and the table top is 35 mm tick, taking it up to standard table height of nearly 72 cm. Standard height for a dining table is always in the range of 71 to 75 cm.

I also have Free plans for this table

This table was built in 1996. It seats seven, eight is a squeeze. For having more guests, I built an extension for it in 2018. 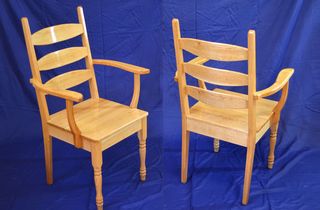 How to build a
simple table

Building a kid's table
To my   Woodworking website, or the Woodwork projects page.