This is a fairly simple project. I shot video of it as I was building it, so I was able to extract a photo of just about every step. So there's a lot of photos, considering the relative simplicity of this project.

I also have plans for this table

I used a spruce 2x8 for the lumber. First I cut off a section a bit longer than twice the length of the legs.

Next I ripped this piece into two down the middle...

... and flattened one face of each half on the jointer.

I then glued the two pieces together to form one thick piece...

... which I then squared up on the jointer after the glue had dried.

I then ripped one board off of that on the table saw, which will form two of the apron rails.

I cleaned up the bandsaw cuts on my jointer. Note how my right hand is hanging over the jointer fence. I prefer to keep it there so that if something unexpected happens, my fingers won't reach down to the cutter head. I have to be cautious, seeing that I don't like the jointer's guard obstructing my work.

Next I trimmed the tops of the legs to the right size on the table saw. Only the sides of the legs facing each other are tapered. I used the outside face as a reference to accurately cut the top untapered section of the legs parallel.

Next I used my slot mortiser to cut mortises into the legs.

Once set up, I cut all the tenons into the ends of my apron rails.

I trimmed the cheeks of the tenons on my table saw. Note that the tenon is offset from center. I actually prefer to offset the tenons from center - it makes it easier to figure out which way the piece of wood needs to go on.

I trimmed the ends of the tenon on the bandsaw...

... and carved them slightly round, with a carving knife, to fit into my slot mortises.

The finished mortise and tenon joint.

Before I could assemble the table, I needed to finish up all the parts.

The next step was to make a cutout on the bottom edge of the apron rails. I marked just one of my pieces, cut that out with a bandsaw, and used that to mark my other pieces.

I cleaned up the bandsaw cuts on my belt sander.

Next I cut three slot mortises into the apron rails. I made some blocks that hook into these slots to hold the table top later.

I used a 1/4" round router bit, but not fully raised, to round the lower edge of my apron rails.

I used the same bit, raised to its full height, to round the edges and ends of the table legs.

With all the cuts finished, I could glue the table frame together.

I glued two legs and one rail together. Then I make another assembly like that with the other two legs and let the glue dry.

Once the glue dried, I glued the remaining apron rails into a pair of legs, then added the other pair of legs. I had to glue two joints at the same time for the last part.

I recycled some Ikea shelving to make the top. The shelving was a bit longer than I needed, so I first trimmed it to length.

The table is slightly wider than the recycled shelving, so I edge jointed another board to the side of it. The joint is just a flat joint. I flattened both sides on the jointer before gluing.

I needed to let it dry for at least an hour for the glue to dry before I could continue to work on the top.

I used a hand plane to smooth out the joint.

Then a bit more smoothing with a belt sander. I have a soft pad under the leather pad under the belt, so it won't gouge the surface. The last bit of sanding was with only very light pressure to leave the surface a bit smoother.

I marked an arc on the corners to round them off. A can of WD-40 was just the right diameter for my arc.

Then I cut the corners round on a bandsaw. I smoothed that cut on the belt sander afterwards.

I rounded the edges of the table top using a 1/4" router bit partially raised.

The table top is held onto the frame with little blocks. This allows for some wood movement in the table top.

I made the perpendicular cuts on the table saw, then the lengthwise cut on the bandsaw.

Finally, I attached the table top using these little blocks.

That completed the construction. But I took the top of the table off again before varnishing it. It's usually easier to varnish furniture in pieces.

Plans for this table
Also in adult size 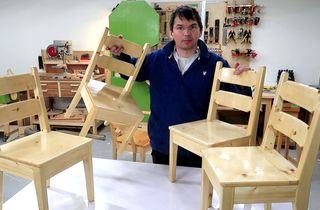 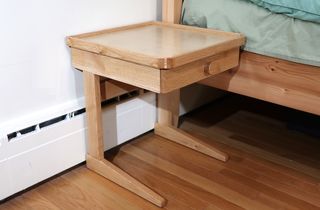 How to build a
simple table

Ron Walters's
folding TV table
Back to my Woodworking website