Experimenting with a UV varnish

It was in 2013 that Jordan emailed me about his company's UV finishing product. Their system consists of a finish, and a relatively inexpensive ($50) UV lamp for curing it. I was curious, and they were interested in my input, and potential exposure through my website. So we arranged for a day for them to come and visit. My friend Pat Hawley who builds guitars and also helped out with my ukulele build series was also very curious, so he joined us.

The varnish is applied with a brush or spray, and cured by UV. Here we are using a mercury arc lamp that they sell. This bulb differs from conventional mercury vapour bulbs in that it uses glass that doesn't filter out the UV light. It takes 5-10 minutes under the lamp to cure the finish, but the bulb covers a relatively small area.

The finish can also be cured by sunlight. About half an hour of full sunlight is sufficient, but it needs to be full sunlight, head on, with the sun high in the sky. Here's trying a sample outside. It took more than half an hour in this case, with the sun not that high and scattered clouds. Given that the sun can cover a much larger area at once, I'd say sunlight is generally faster than the bulb.

Pat Hawley brought his UV finishing system, which comes with primer, a finish, and a really really bright UV lamp. That lamp cures the finish in seconds, but protective gear is needed when using it. I later lent Pat a long sleeved shirt because he was worried he might get a sunburn on his arms.

To get a guitar-quality finish always involves some buffing. The finish on its own is not quite smooth enough, and there are always some defects that need buffing out.

The advantage of hard UV finishes is that defects can be buffed out, and the surface brought to a high gloss.

Most finishes would not stand up well to a buffing wheel.

This can make for a flawless, mirror smooth finish.

Guitars are probably the most demanding applications of finish, getting handled a lot and sometimes getting stuff spilled on them, yet the finish still needs to look nice.

It's taken Pat some time and experimenting to learn to get good results from his UV finishing system.

A finish needs to be hard, but not too hard to be brittle. This is sample piece of wood with a finish sample on it that was sent to Pat, and it's developed some cracks!

It was fun experimenting with the finishes. Here, Pierre Erizas, also a guitar builder who came with Jordan, is applying some finish. The finish, straight out of the can, is a bit on the thick side. Thinning it with acetone allows thinner coats to be applied.

We mostly cured the finishes with Pat's lamp, because it's much faster. I put a black plastic container below the lamp, just to cut down on UV reflections from the lamp. The lamp takes a few minutes to start up, so we didn't want to turn it on and off all the time. UV from the lamp is only about as much as sunlight, so it's not that dangerous, but just to be careful.

Pat Hawley, having had similar problems with his UV finishing system, asked for a knife and started scraping away at a sample of finish. It was surprisingly easy to get under it with a knife and peel it off. Adhesion to the wood was not that good.

Pat said his UV finishes, when applied without a primer, have the same problem. A primer is also essential for other reasons. The pores of the wood need to be filled. If the UV finish soaks into open pores of the wood, the UV light can't cure it. Another problem can be air trapped in the pores. As the UV light is applied, the wood warms up and air in the pores expands and can cause bubbles under the finish.

On this piece of rosewood, the finish could be peeled off in whole strips with a sharp chisel. Some of these oily exotic woods can also be bad for finish adhesion. Though the samples of ash wood I had also showed adhesion problems. Doing a simple screwdriver drop hardness test, the ash was actually harder than some of the fancy East Indian rosewood samples Pat brought.

There's something about peeling finish with a chisel that was appealing, in the same way as popping bubble wrap, or picking at a scab. It really was surprising how cleanly the finish could be peeled off.

We did a test piece, with the primer Pat uses for his finishing system, and Pat's finish and the Füz finish on the other side, then cured with his UV light, as before.

With the primer under the Füz finish, adhesion was much better. Though, with enough effort, you could still peel the finish with a chisel.

Scratching the finish with sandpaper, subjectively, the Füz stood up to that slightly better, though you had to look carefully to tell a difference. But then again, sandpaper scratches glass too, so you would expect it to scratch pretty much any finish.

A few days later, I left a small container with some finish residue in it out in the sun to cure. The hardened finish separated from the plastic container with ease (much easier to get out than dried Varathane), and trying to bend the dried residue, it was like a hard plastic, snapping if bent too far. The Füz finish is probably a bit harder than what is ideal for wood.

The initial plan had been to do some tests on this finish compared to some other finishes, but we got completely bogged down on experimenting with the adhesion problem. That, and I hadn't had time to finish preparing the other bits of wood to compare with. With drying time in between, preparing other finishes takes MUCH longer. But Jordan was happy to have learned a lot, thanks to Pat's experience with UV finishes.

Afterwards, Pierre showed off one of the basses he'd built, and I showed Pierre my homemade ukulele

And then they spotted my homemade organ, so that had to be played, naturally! :)

Afterword:
Two days later, Pat emailed me asking if I had a headache. He said he had a headache, which he suspected may have been the finish. He said he gets headaches from his UV finish if he doesn't use it inside a fume hood he built just for that.

As perhaps coincidence had it, I had a headache that day as well, which is rare for me. Though my headache was probably more from experimenting with it the next day, as I didn't have a fan in the window this time. I noticed, leaving the house, and coming back, that I could smell the finish as soon as I came in the door. So I put a fan in the workshop window and thoroughly vented the shop and house for an hour. Part of the problem was that I left an unsealed container of the finish in my shop (a cool thing about UV finishes is that even an open container won't cure without UV exposure). When using UV finishes, I'd say a well ventilated area or a respirator is advisable.

I had been hoping this finish would offer a quick alternative to what I use now, but the lamp covers too small an area, and with concerns about fumes, I won't be using this finish indoors. I may still use it for some special applications, like putting a hard coating on a work surface of a homemade machine. I used it for my homemade tablesaw top, but using the appropriate primer, and curing it with an hour of sunlight instead of the UV lamp. It's a hard finish, but not as durable as melamine.

But if you have particularly demanding applications in terms of hardness and resistance to solvents and chemicals, UV finishes are certainly an option to consider, and a $50 UV bulb is a great way to at least experiment to see if this is what you want. For something the size of a guitar, you probably want to buy several bulbs.

That was fall of 2013. Checking the link in July 2015, I see this website is no longer up. Maybe this finish had too many problems. But there are other UV finishes, but also tricky to use.

Many thanks to Jordan for being ok with me writing about this, and to Pat for his experience with UV finishes. I was really mostly a spectator in this.

Pat on finishing
his ukulele 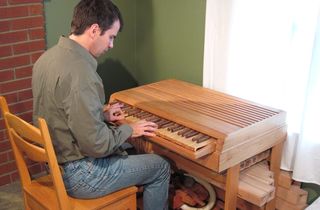 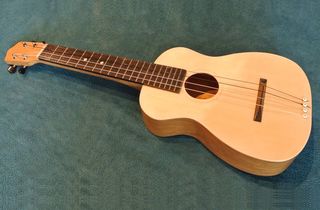