Jim Ryan sent me some pictures of his very simple separator. You could hardly call it
a "cyclone", seeing that it's based on a square bucket. But it separates surprisingly well.

I have followed your site for a while now, and was especially interested in your dust collector, since I need one and like how you have made yours. I experimented with separators some time ago, and ended up with this one, which I hope you will find interesting.

I wanted to trap the small screws and other hardware I was always accidentally sucking into the vacuum when I cleaned up. When I started working on this I had just begun using the Shop-vac bags instead of the older round filter and filter cover. I liked the bags, but it is next to impossible to find a small screw in one without cutting it open, which inevitably results in a big mess.

As the photos show, the separator is just a square plastic pail with 1-1/2" PVC going from the hose connection on the vacuum cleaner into the top of the pail. The hose connects into a PVC "nozzle" fitted close to the side of the pail

Obviously, the air flows through the hose along the side wall of the pail, then up through the center connection in the lid, then through the PVC pipe into the vacuum cleaner.

Here is what gets trapped. The first photo shows how everything ends up in the pail, the second shows how fine the collected sawdust is. It will not trap extremely fine stuff like your flour test, but I don't want that trapped in this case, since it would make digging through the trapped stuff messier.

It turns out that the O.D. of a standard coupling exactly fits the I.D. of the vacuum cleaner hose connection. I glued in a small piece of pipe to connect the lower elbow.

The O.D. of the Shop-vac hose (with the big end fitting removed) is a tight fit to the I.D. of the 1-1/2" PVC nozzle. Also note the notched hole in this photo. This is where the heavy wire handle connected to the pail.

I wanted to use a larger vac, but finally decided on this one because it had a top surface I could mount the pail to, and it was supposed to be quieter. It is marginally quieter, but not that much.

I originally fastened the pail to the top of the vacuum with four tech screws through the bottom of the pail into the top cover of the vacuum cleaner, but this made the pail hard to empty. I made the handle from some 1/2" conduit, then decided to hold the pail in place with the two pieces of heavy wire you see on the first two photos at the top of the email. The wire was cut off of the ends of two pail handles. I cut notched holes in the lip on each side of the pail just like the ones that the handle originally connected to, drilled some appropriate holes in the handle, then bent the cut off handle wire to suit. The wires keep the pail in place, but it can easily be popped loose for emptying.

I use a vacuum cleaner bag in the vac rather than the standard round pleated filter with the cloth cover. The bag lasts forever because it never sees any big stuff, only the finest powder and sawdust that can make the turn out of the pail.

The separator exceeded my expectations. Actually, the first one I made used a larger square pail. It worked about the same as the current pail, but I changed to the smaller one because it was working better than I wanted it to, as I really only wanted to stop the heavy stuff, like screws, as I mentioned.

The only thing I need to do now is mount the vac on a dolly with a wider wheelbase. It is too easily tipped over. 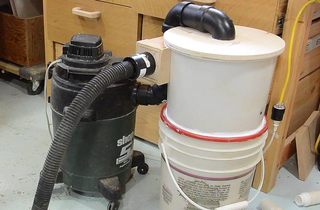 Two bucket cyclone
Back to the dust collector page