A box with wheels is a good way to make the hard to reach space under a big shelf more useful.

I already made one box like that out of scraps, to go under a shelf like this, and decided to make another using more scrap wood I had lying around.

Two of the sides are actually particle board scraps. Good enough for this, but useless for just about anything else.

The corners of the box are joined with rabbets. Two of the pieces already have rabbets in the end. I'm cutting rabbets in the other end with two cuts on the table saw.

I gave the old surface a light sanding for better glue adhesion, then glued together the rabbets.

This weathered piece of plywood will make the bottom. Here I'm cutting it slightly smaller to get fresh square edges.

I then sanded some of the weathered gray off to make the plywood look less old.

I cut rabbets into the sides of the box (before assembling it) so the edges of the plywood would be hidden. I cut the plywood to fit exactly in the opening, then applied glue to all surfaces, and squeezed it in.

I added a few clamps to make sure the edges glued well.

I also added two screws to each side of the bottom, just for good measure.

I added a slight round over using a small palm plane to each corner and the top and bottom edges of the box.

I also added two screws to each corner in case the glue joint fails.

I mounted some bed frame casters to this box. I have a lot of these wheels kicking around from having picked up garbage bed frames for the angle iron.

I drilled a hole for the pin that these casters normally swivel on, then inserted the casters.

Bed frame casters normally swivel in a plastic sleeve for the pin, but even with that, they don't swivel very well. I only need to be able to pull this box in and out from under the shelf, so I put two drywall screws next to the caster wheel to prevent it from swivelling.

Four casters mounted. I oriented them to face inward. The swivel pin ends up just inside the box, and when the box is loaded, the casters will want to tilt inward, forcing the pins of the casters to tilt outward and press against the inside sides of the box.

I tested the box by riding it a bit like skateboard. It worked fine.

Then Harriet came by, and I gave her a ride in the box. She didn't like it much.

And here the box is filled with stuff already, under the shelf. After this one, I built another one out of more scraps to fill the third space under this shelf.

I still have a lot more work left to do to get organized in my new shop, and it's good to have another place to put stuff away. A key part of getting organized is to make enough "away" places to put stuff. 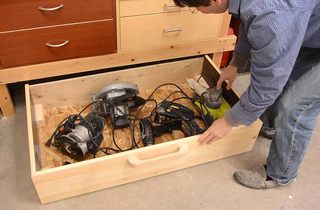 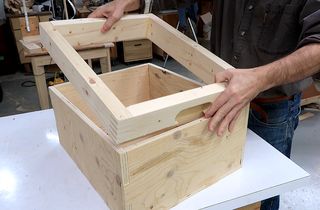 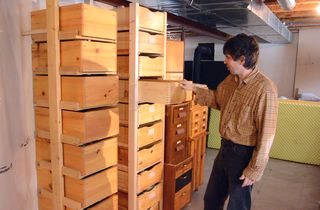 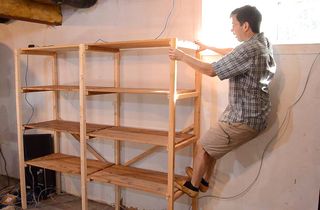