Every once in a while, I shoot a video just talking about stuff, and I figured I had enough miscellaneous stuff for that again. For those who can't watch the video, or want a bit more detail, here's more on what I talked about in the video:

I have been approached about sponsorships quite a number of times recently. I'm not entirely opposed to sponsored videos, but so far, I have not come across an offer that I wanted to do. Thinking in terms of the audio book people, or the mattress people, both of these would pay handsomely, but would require me to say a whole bunch of things that I don't fully agree with. The free audio book is only free if, once you sign up, you remember to cancel after the trial period. So I wouldn't exactly call that a free audio book. I'd be fine with describing the trial as what it is, but not something else.

The mattress people - way too much needs to be said about how good the mattress is and whatever kind of foam. It would add over a minute of stuff to the video that really has nothing to do with what the video is actually about, and I work hard at removing unnecessary scenes from a video. But the part I really have issue with is claiming that it's a good deal at $800 or $900 US. I paid less than half as much for the queen size mattress we have, and I'm quite happy with it.

A few months ago, Jake Smith emailed me with the subject line "Trade lumber for exposure?". He sells osage orange wood online. I originally declined, but then curiosity got the better of me. Osage orange is a very dense and hard wood that grows in parts of the southern United States, and is in some ways considered a weed. I thought I'd do some hardness testing on it, and maybe use it for machine parts. But it's been months, and I haven't done anything with it. So far, I have only ever used exotic wood for making bandsaw guide blocks, runners for my small table saw sled, and wooden rings. but I thought I should at least do some hardness tests on it and mention it. It is a quite hard wood compared to oak, and about on par with white ash. The average divot depth from dropping a #2 Robertson screwdriver on it from 1.8 meters was about 0.025"

If you want to buy some osage orange wood, his contact information is jake9282 @ wind stream. net (remove the spaces from the address to make it work). Jake also has a facebook page: Triple Tree Woodworks

If you read my articles or watch my videos, I'm sure you already know that I'm no fan of pocket holes. They do have their uses, but one shouldn't rely on them exclusively.

Like many woodworkers, I end up with a stash of plywood offcuts that I keep for projects that need something about that size. The traditional thing to do when you have a larger piece of plywood (say 1.5 x 1.2 meters) and need something that is 0.3 x 0.5 meters, is to cut 0.3 meters off the narrow edge, and then cut the piece out of that. The problem is, depending on what size piece I may need next, it may be more optimal to cut the piece off in different ways. So what I started doing is to just cut a corner out of the plywood for what I need, leaving an L-shaped or odd shaped remainder. That way I'm more likely to be able to get what I need out of it later. The other advantage is that it keeps my plywood of a certain type in once piece, which means I don't have to go looking for separate scraps. The main downside is that it can be difficult to cut a corner out of a sheet. If it's a smaller piece I need, I can cut it on the bandsaw. For larger pieces I cut it on the table saw, turning off the motor once I have cut partway in.

I have gotten comments from time to time asking me to do another project with Rachel. But Rachel has been somewhat preoccupied with our baby project. First with a lot of morning sickness, then complications towards the end of the pregnancy. Rachel's water broke early, though she managed to keep the baby in for another four weeks, bringing her almost to term. It's all been terribly worrisome and risky, so we figured (like Russians only announcing a space mission after the astronauts returned safely to earth) we'd wait till the baby is safe at home before announcing it too broadly. She was born August 1 2015, finally home August 12, and I put her in a video before we even took her out of the car seat!

More vlog-y videos on this channel

The story of Amogla camp 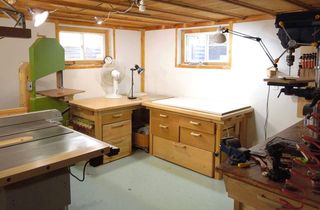 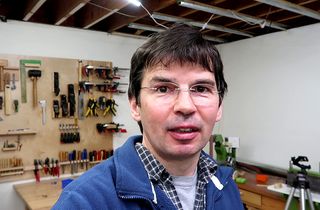 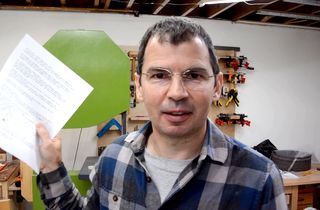